Early this week, in Shine after Rain I wrote about the three-day super storm that lashed Sydney recently.

Sydney-siders had not even recovered from the previous storm that two days down the track yesterday again a freakish unusual storm battered Sydney, this time with hailstorm.
I captured some of the heavy rain and hail in motion as you can see the white vertical haze. 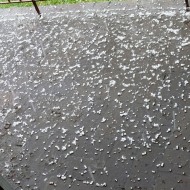 While this hailstorm was causing chaos in Sydney, minutes after that came along a huge earthquake causing devastation in Nepal.

These are vagaries and forces of mother nature. One moment we sit calm and quiet, the next moment we are badly shaken. Nature makes us run around in awe and fear.

In olden days, it was not possible to capture images of shaking earth during earthquakes or overflowing waters causing tsunami. But nowadays the same cameras that take our beautiful selfies, the same security cameras that we deploy to save us from impending dangers, now they show us our very own devastation in the hands of nature…as it occurs minute by minute.

My poem on the above thought:

The above video (courtesy: you tube) shows yesterday’s earthquake in Nepal shaking the earth. My Haiku poem to sum up nature’s dance:

Nature’s victory on humans. Yes. But as usual we rise above it all by sharing our resources with those who have been hard hit. The undaunted human spirit survives.

Header: self-clicked – hail on the grass.