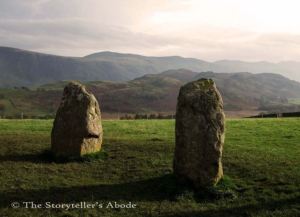 This was the lush valley of Solan Hills where they both went to school together, played hand in hand and loved each other even when they didn’t know the meaning of love.

The two sturdy rocks in the middle of soft grassy terrain was their favorite spot. They gave these rocks their own human names. They would sit leaning on their own rock and talk for hours.

But as they grew up they had to leave these meadows, where they both truly belonged.

He got a job in a far-off city. She followed him. They got married and the next sixty years slipped by bringing up a robust family.

But the pair had left their hearts behind – in their small town full of grassy mounts and proud rocks – the memories of which recurred in their dreams and always gave them strength.

So when doctors told him he had terminal cancer, he pleaded that he wished to be buried next to his favorite rock in Solan. She nodded and reassured.

They were two bodies and one soul. Soon after he breathed his last, she lost her will to live.

Their children brought them back to their playground and now they lie in deep sleep next to their favorite rocks.

The whole town remembers them as lovers who came back to where they came from.

This is my first ever story attempt on my blog.  It’s in response to Flash Fiction for Aspiring Writers (FFfAW) , a story challenge hosted by Priceless Joy.
The above photo prompt for the story was provided by Louise from The Storyteller’s Abode.

Thanks for reading! In my new found story-writing mood, I have written two more stories in response to the above photograph.  I reckon they are different if not better than the above story. You can read them here: Extracted Promises & Rocks that Talk